Born in Russia, Alex Wagman was attracted to art as a child, drawing and sculpting images from American popular culture. With his family, he immigrated to Israel in 1957. Following three years in the army, including the Six Day War, he immigrated from Israel to the United States in 1972.

From the mid-1970s, Wagman developed and built residential apartment buildings in New York City. Since 1990, Wagman has lived with his wife and two sons in New York, where his studio is located. In the mid-1990s, Wagman realized that his true passion was sculpture, and he began to construct large figures using metal armatures and concrete. Since 2003 creating art became his full-time pursuit, He taught himself a variety of techniques including stone carving, modeling in plasticine, mold making, and developing patinas.

Devoted to an expressive realism, Wagman started working in series that he considers ongoing, beginning with the sculptures of “Human Ordeal”, To this end, Wagman’s work bears witness to human suffering and the human drama of aging and mortality. In the implied narratives are the pathos, humor, and absurdity that are all part of life. There are the devoted lovers of his “Romance” series (including a large-scale portrait of his wife) and the anguished busts of the “Mindset” series. In the “Speaking With Hands” series, the artist focuses on the subject’s face and his hand in gestures of defiance or contempt.

In recent sculptures, Wagman’s own satirical bent is clearly expressed in his “Mockery” series, which turns our attention of how our lives are dominated in our political and social systems. There are biting , incensed portrayals such as “Putin’s Puppet” a perspective on current US and Russian relations, or “Mission Accomplished”, an image of George W. Bush in a flak jacket after making a theatrical landing on deck of an aircraft carrier to proclaim the end of the war in Iraq less than three months after he started it. In the sculpture “Red, Blue and the Purple” sculpture, Uncle Sam is being pulled and nearly tipped over by diminutive figures who represent the political extremist that trying to hijack the Republic. 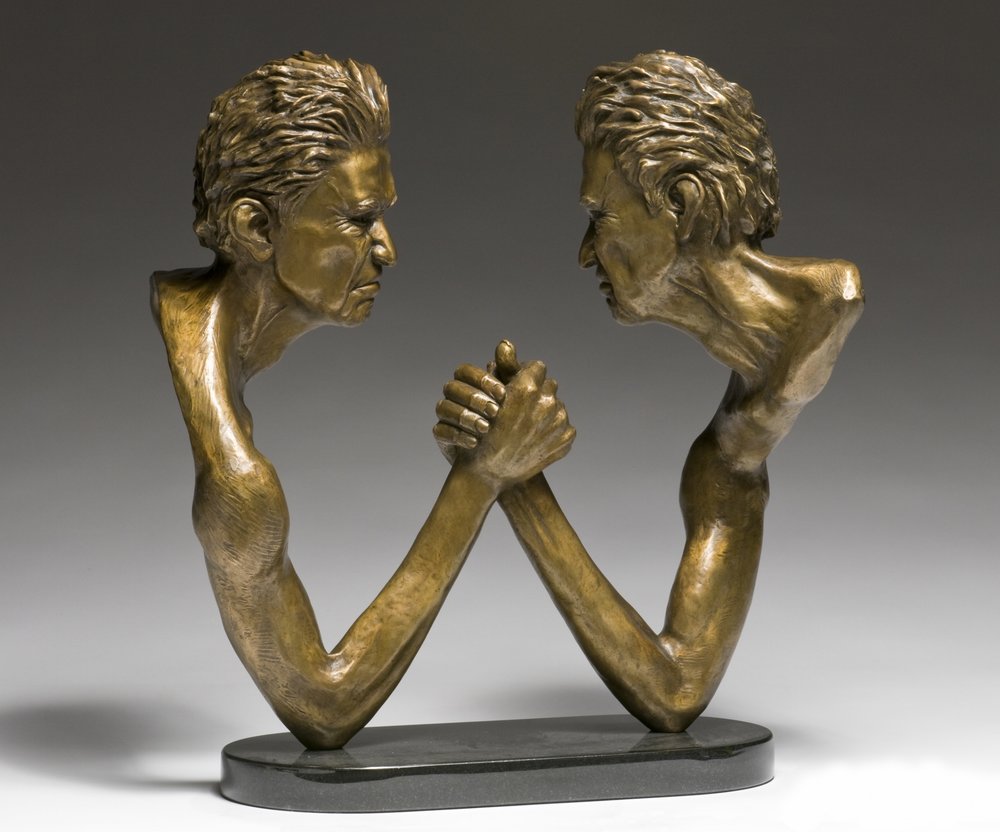 These sculptures are meant to speak directly to the viewer, evoking experiences that are familiar to all. The work is meant to be accessible, striking a balance between sculptural form and the essence of the human condition. In addition to aesthetic pleasure, the intent is to move and impact the imagination and feelings of the viewer.